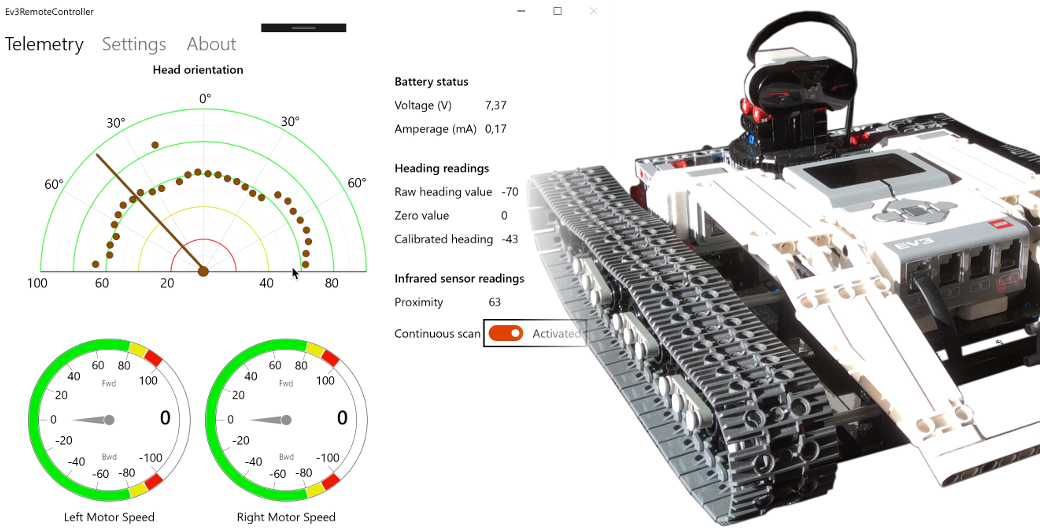 The small video below highlights the app main features, but let me better explain.

Update: have a look at the full video.

The remote control app is a Universal Windows Platform application which:

Quite nice isn’t it?

And you can reach the source code for this app on GitHub here! There will be constant updates to this app (well, that’s the plan at least), and I will post the compiled version soon on this blog. Maybe, I will also find time to polish it enough to upload it to the Microsoft Store.

To program the Ev3 Tracked Explorer itself, I’ve used the ev3dev firmware with the ev3dev Python bindings. This choice has been crucial for the development of the part of the application resident on the rover.

The Ev3 Brick is programmed to act as an UDP/IP server which processes the commands coming from the remote control app,  and replies with messages containing the status of the rover sensors and actuators.

The full code of the Python application is also available on Github. This code too needs some more polishing to improve the reactivity of the rover to the commands coming from the remote control app; however it indeed works!

The Lego Mindstorms Ev3 model shown in the pictures here is a MOC (My Own Creation), hence I’m pleased to share the complete building instructions here; at the end of that page there is the link to directly download a .pdf file with the instructions. Please note that build instructions also need improvement.

Well, this is all work in progress!

What to expect next

First, I have to finish the remote control application; I will post here the package to install on a PC to let it be easier to try it; of course you can build it yourself from the source code. Next, I must improve overall performances. Last the model itself (never forget you’re playing with Lego!!!) needs some tweaks here and there.

As the code gets readier and readier, the plan is to share videos of the rover in action. It’s actually fun to drive the rover trying to avoid obstacles looking only at the IR sensor radial feedback: it feels like being (or imagining to be) in a submarine!

4 thoughts on “Remote control app for the Ev3 Tracked Explorer”

Are you here because you have seen the video of the Ev3 Tracked Explorer Mark II and would like to build and drive it? Then, you are definitely reading the right post! Here, I will do my best to describe

Sooner or later every enthusiast programs a Lego Mindstorms Ev3 robot to follow a line. Indeed the line following task is the first that I tried myself, and there is a post on this blog where I show the results obtained with

Today, I present the Formula Ev3: a racing car! Personally I like this model for its very clean profile, which aside from the cables, resembles pretty well a Formula 1 racing car from the eighties. It also features a openable

Do you want to code advanced tasks for your Lego Mindstorms Ev3 brick? If your answer is yes, you are definitely in the right place! In this tutorial you will learn how to set up your environment to start to program with C#

Hi there! This is the first of a series of posts about the implementation of a Proportional Integral Derivative or PID controller on board the Lego Mindstorm EV3. I’ve set a static page here, hopefully to let it easier to

Hello! Wow, it is more than one month that I didn’t post anything. But that’s just because I was hard-working on the following items: a new robot… equipped with a brand new gyro sensor, a C# library to speed up robot

Today, I finally post the pictures of the Ev3 Tracked Explor3r that I’ve built using the Lego Mindstorms Ev3 and programmed in Python with the Ev3Dev firmware. This model is a MOC (my own creation) so its full building instructions are available here. This model does

Hello, I’ve just updated the Sup3r Car Program section with the Part 2: the control strategy. Check it out, and let me know your thoughts! Bye! Riccardo

This website uses cookies to improve your experience while you navigate through the website. Out of these, the cookies that are categorized as necessary are stored on your browser as they are essential for the working of basic functionalities of the website. We also use third-party cookies that help us analyze and understand how you use this website. These cookies will be stored in your browser only with your consent. You also have the option to opt-out of these cookies. But opting out of some of these cookies may affect your browsing experience.
Necessary Always Enabled
Necessary cookies are absolutely essential for the website to function properly. This category only includes cookies that ensures basic functionalities and security features of the website. These cookies do not store any personal information.
Non-necessary
Any cookies that may not be particularly necessary for the website to function and is used specifically to collect user personal data via analytics, ads, other embedded contents are termed as non-necessary cookies. It is mandatory to procure user consent prior to running these cookies on your website.
SAVE & ACCEPT
Loading Comments...