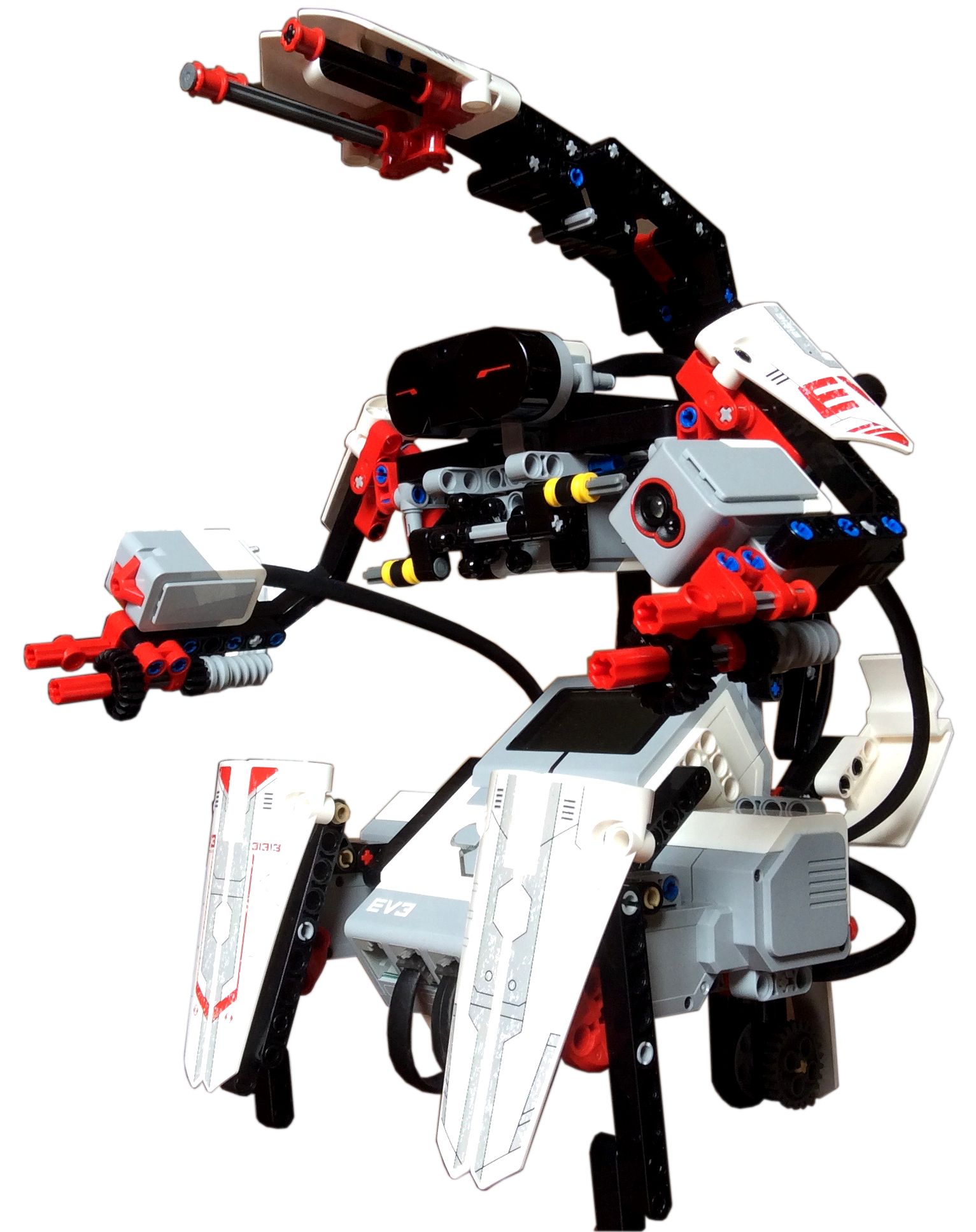 The SENTIN3L is a very interesting insect droid which walks on its two front legs and on a well disguised single rear wheel. This robot can be entirely built with the Lego Mindstorms Ev3 retail set and it is described in the book “The Lego Mindstorms Ev3 Laboratory” written by Daniele Benedettelli, where you can find also the building instructions. Keep reading to discover what makes this model so interesting.

This post has been just updated with a video demonstrating the abilities of this droid.

→ Walking with a good control strategy

This droid has each of the two front legs driven by an Ev3 Large Motor.

If you have a look at the picture on the left, you’ll notice that each leg is in turn made up of two smaller legs driven by the correspondent motor wheel. The smaller legs are assembled to the two motor wheels to transform the angular motion of the motor into steps: while the leg that touches the floors is pushed back to let the robot advance, the leg that is not touching the floor is moved forward to be ready for the next step.

This type of transmission, called cam, is simply obtained in this case by connecting the two technic beams at the diametrically opposed holes of the motor wheel.

The SENTIN3L has two arms equipped with a deadly cannon and a terrible machine gun…. 🙂 The droid moves the two arms alternatively back and forth to fire. This alternative motion is smartly achieved transforming the angular motion of the Ev3 medium Motor located under the head into linear motion; in this case too, the two arms are phase-shifted of 180° to achieve the alternative motion. Very cool!

Walking with a good control strategy

We have already said that the two Ev3 Large Motors drives the two front legs. However it’s not as straightforward at it might seem at first glance: if you turn the motors on at full speed, for instance, the droid will surely fall on its side after one or two unsteady, maybe comic, steps 🙂 !

What you really need to do, is to program the robot to synchronously move the legs, step after step, with the same martial cadence. The solution is to program two PID (Proportional Integrative Derivative) controllers whose goal is to regulate the motor angular position and to change the position reference of 180° (one step) once both motors reach the set point position. And you need to start the motion of both legs from a known motor angle.

More on this once the source code is ready!

Check out the video below and the photo gallery!

Have a look at the SENTIN3L gallery! 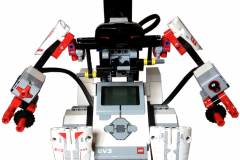 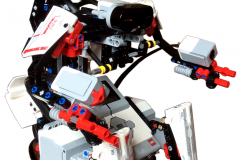 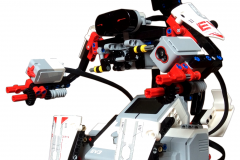 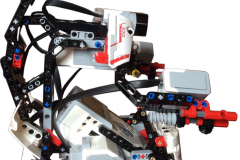 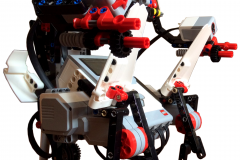 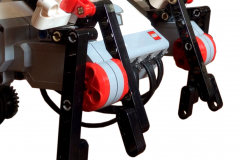 The SENTIN3L: a walking insect droid

Hi there, Here comes the R3PTAR (read Reptar), a slithering snake that can bite you! 🙂 If you are lucky enough to own the Lego Mindstorms Ev3 retail set, you surely know this one. The original building instructions from LEGO

Here I describe a C# R3PTAR Program that let it roam, find and chase the IR Beacon… and when it’s close enough give it three rapid bites 🙂 ! You can compile the C# code I propose in this page

Here I finally managed to share a Sup3r Car video! It video shows this Lego Mindstorms Ev3 model performing the classical track following task. The track is about 5m (16ft) long and 3.5cm (1,4in) wide, while the tape color is black. This

Hello, there! This is the first of a series of posts about how I programmed the Sup3r Car to perform the line following task, check out the video if you haven’t yet. I have uploaded this post as a static page here. The

Hi! As promised, I managed to produce a small video where I show the Sup3r Car performing the track following task. Here we go! Next posts will be about the the algorithms running on board. If you enjoyed the video, please live a comment!

← Back to Part 1 – Introduction and some math ← Back to Part 2 – Some more math 🙂 → Part 4 – Application to the Ev3 Medium Motor position regulation As described in Part 2, we need a new  PIDController class that performs the following computation:

This website uses cookies to improve your experience while you navigate through the website. Out of these, the cookies that are categorized as necessary are stored on your browser as they are essential for the working of basic functionalities of the website. We also use third-party cookies that help us analyze and understand how you use this website. These cookies will be stored in your browser only with your consent. You also have the option to opt-out of these cookies. But opting out of some of these cookies may affect your browsing experience.
Necessary Always Enabled
Necessary cookies are absolutely essential for the website to function properly. This category only includes cookies that ensures basic functionalities and security features of the website. These cookies do not store any personal information.
Non-necessary
Any cookies that may not be particularly necessary for the website to function and is used specifically to collect user personal data via analytics, ads, other embedded contents are termed as non-necessary cookies. It is mandatory to procure user consent prior to running these cookies on your website.
SAVE & ACCEPT