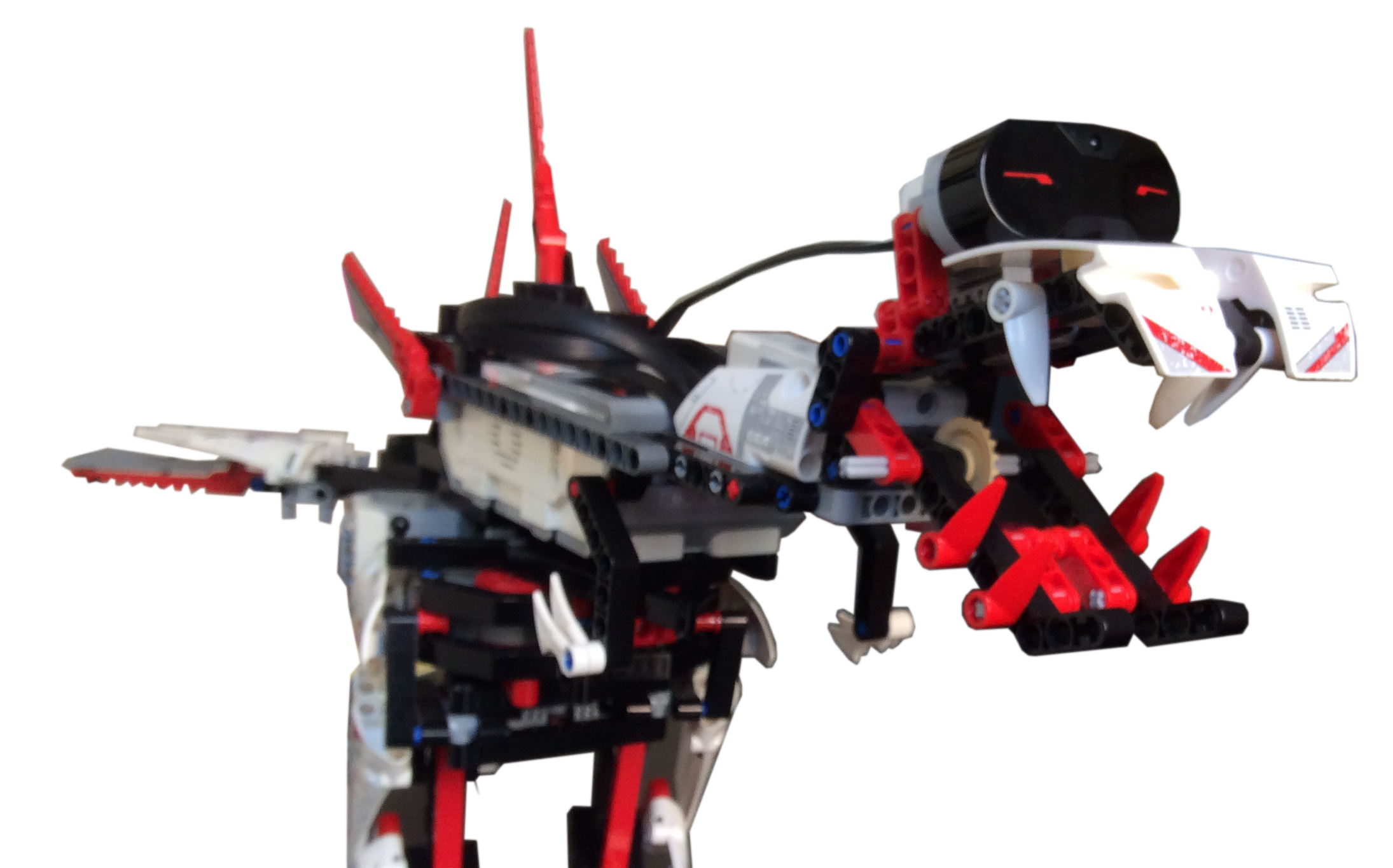 Since the beginning, December 2015, this blog has been about programming the Lego Mindstorms Ev3 brick with C# and the Monobrick firmware library. This time I’ve chosen to try programming the T-R3X with Python and Ev3Dev.

As you may know, the Lego Mindstorms Ev3 Brick comes with a very interesting feature: the Ev3 Brick has a microSD slot on its side which, among other more intuitive functionalities, which you can use to temporary boot the Brick with alternative operative systems.

Monobrick lets you program the Brick using C# and the Microsoft .Net Framework with Microsoft Visual Studio 2015 Community Edition and later versions; it is the firmware replacement I’ve used so far with personal satisfaction.

Ev3Dev is instead a Debian Linux distribution for which several libraries for different programming languages are available (C++, JavaScript, Go, C among others), and Python attracted my interest the most. Moreover, at the time of writing, Ev3Dev is under active development.

You can find the building instructions for the T-R3X in the book of Daniele Benedettelli “The Lego Mindstorms Ev3 Laboratory”.

This robot walks swiping its weight from one leg to the other using one Ev3 Large Motor, and moves forward by advancing the leg not touching the ground with by the second Ev3 Large Motor. There is one Ev3 Medium Motor to actuate its terrible 🙂 mouth.

The Python code proposed let the T-R3X walk around and follow the Ev3 IR Beacon when found. You can download the Python code from the Smallrobots.it repository on GitHub.

Have a look at the video below to see it in action.

The T-R3X with Python and Ev3Dev

Sooner or later every enthusiast programs a Lego Mindstorms Ev3 robot to follow a line. Indeed the line following task is the first that I tried myself, and there is a post on this blog where I show the results obtained with

Check out this R3PTAR Video! In this short video, the R3PTAR has been programmed to follow the IR Beacon and when it reaches the target within the biting distance… Three rapid bytes! You can compile the C# code I propose

Back to Part 1. So, we’ve got the following equation: , which gives the controller output at each instant . To implement this controller, one thing to do is to consider the , i.e. the increment of the control signal from

Here I finally managed to share a Sup3r Car video! It video shows this Lego Mindstorms Ev3 model performing the classical track following task. The track is about 5m (16ft) long and 3.5cm (1,4in) wide, while the tape color is black. This

Today, I present the Formula Ev3: a racing car! Personally I like this model for its very clean profile, which aside from the cables, resembles pretty well a Formula 1 racing car from the eighties. It also features a openable

Hello, there! This is the first of a series of posts about how I programmed the Sup3r Car to perform the line following task, check out the video if you haven’t yet. I have uploaded this post as a static page here. The

This website uses cookies to improve your experience while you navigate through the website. Out of these, the cookies that are categorized as necessary are stored on your browser as they are essential for the working of basic functionalities of the website. We also use third-party cookies that help us analyze and understand how you use this website. These cookies will be stored in your browser only with your consent. You also have the option to opt-out of these cookies. But opting out of some of these cookies may affect your browsing experience.
Necessary Always Enabled
Necessary cookies are absolutely essential for the website to function properly. This category only includes cookies that ensures basic functionalities and security features of the website. These cookies do not store any personal information.
Non-necessary
Any cookies that may not be particularly necessary for the website to function and is used specifically to collect user personal data via analytics, ads, other embedded contents are termed as non-necessary cookies. It is mandatory to procure user consent prior to running these cookies on your website.
SAVE & ACCEPT